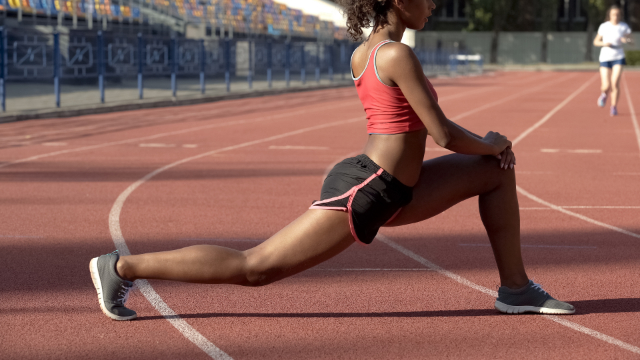 On all levels of sports, consistent and varied efforts are made to reduce the incidence of injuries. Warm–ups and group stretching routines are commonplace on most sports teams, while some organizations take it a step further by implementing targeted injury–prevention programs specific to that sport. But which of these methods truly have an impact on injury avoidance and which may not be worth the time? And what role does specializing in a single sport play in an athlete’s injury risk profile?

Below, we aim to answer these and other questions related to the prevention of sports injuries.

Does stretching reduce the risk for injuries?

Stretching is easily the most popular pre–activity ritual of all athletes across the sports spectrum. This is why it may come as a shock to hear that in the majority of cases, stretching does not have the effect that most believe it has.

There are two types of stretching: static and dynamic. Static stretching is what comes to mind when most people think about stretching. It involves the lengthening of a muscle until a stretch is felt or discomfort is reached, and then holding it for a period of time (usually 10–30 seconds). Dynamic stretching, on the other hand, involves actively performing a set of movements that resemble those involved in a particular sport. This helps to prepare the body for the physical demands of the activity that is about to come.

According to one systematic review, which analyzed the findings of 12 studies on these types of stretching, both static and dynamic stretching were found to improve athletic performance, but the effects were only small to moderate. In addition, static stretching had no detectable impact on the risk for injuries, while no data was available for dynamic stretching.

Other research has also suggested that dynamic stretches before a practice or game can improve athletic performance and possibly even lower injury risk, while static stretching has been found to potentially impair athletic performance. Thus, it’s recommended stretching should be considered optional before exercise and be based on personal preference. If you do decide to stretch at this time, avoid static stretches and instead complete a warm–up for at least 10 minutes that involves light aerobic activity and some dynamic stretching.

Another strategy to reduce injury risk is a more focused effort through carefully designed injury prevention programs. These types of programs are based around a single injury or group of injuries that are most common in a particular sport and aim to address any strength or mobility limitations that will make them more likely to occur. The goal is to train the athlete’s body to be fully equipped and prepared for the demands of the particular sport, thereby reducing injury risk.

One study that reviewed eight high–powered studies called meta–analyses on prevention programs for anterior cruciate ligament (ACL) tears, which are one of the most common and devastating injuries in sports. Six of these meta–analyses only included data on female athletes. Results showed that the prevention program led to a 50% reduction in the risk for all ACL injuries in all athletes and a 67% reduction for non–contact ACL injuries in females. While additional research is needed on male athletes, these findings strongly suggest ACL injury–prevention programs may be beneficial in sports that involve lots of high–impact landing and twisting movements. A program similar to those used in these studies can potentially be implemented during team warm–ups.

Does strength training have a similar effect on injury risk?

Strength training is also popular not only for improving overall fitness, but as a means to prevent injury. The concept is that stronger muscles will allow an athlete to better manage the “load” of their sport, which is how aggressively their tissues are challenged during performance.

To evaluate the effectiveness of strength training on injury prevention, a systematic review and meta–analysis was performed on six studies called randomized–controlled trials. Although the interventions used and populations studied differed between these trials, all six showed that strength training consistently reduced the risk for both acute and overuse injuries. In addition, a relationship was identified in which more frequent performance of these programs was associated with an even greater their injury risk. The quality of this evidence was also primarily rated as high and no negative side effects were detected. Therefore, strength training could serve as another effective intervention to mitigate injury risk in athletes.

What risk does specializing in one sport pose for young athletes?

About 72% of school–age children—nearly 29 million—participate in at least one organized sport, and this involvement is associated with a variety of physical and mental benefits. Many of these young athletes only participate in one sport and are often involved in practices, competitions, camps, and other forms of training throughout the entire year. This is called single–sport specialization, which is believed to help them eventually become elite athletes in the long term; however, it may not be the best approach for their overall development.

Research is plentiful on this topic, and according to one study, sport specialization is associated with overuse injuries, burnout, and social isolation. It can also lead to reduced motor skill development and may cause athletes to quit sports at a young age. For these reasons, young athletes should be encouraged to participate in a variety of sports during their early years so that they can develop a variety of motor skills and also identify the sports that they most enjoy. For those that do decide to specialize in one sport, participation (in hours) should not exceed their age, and those that engage in more than 16 hours of intense training per week should be monitored for signs of burnout and overtraining, which can lead to injury.

What role does sleep play in injury risk?

Adequate sleep is a crucial component of optimal overall health for all individuals, but it is particularly important for athletes. Fatigue is a major risk factor for injuries, and sleep deprivation contributes significantly to chronic pain. Good sleep habits, on the other hand, can boost athletic performance and will likely reduce injury rates.

According to one study performed on endurance sports athletes, getting less than seven hours of sleep over two weeks was associated with a significant increase in the risk for new injuries, while getting more than seven hours was linked to a significant decrease in injury risk. Hitting this mark is difficult for many athletes with busy schedules, but practicing good sleep habits is a key to exercise performance that should not be overlooked.

In our next newsletter, we’ll look at the role of nutrition in post–workout recovery.